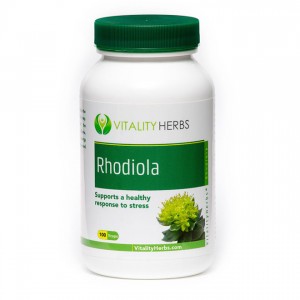 Rhodiola, also known as Arctic root, Golden root, Rose Wort, and Roseroot, is a plant in the Crassulaceae family that grows in cold regions of the world. Native to northern Europe, central Asia, and parts of North America, Rhodiola is common in Russia, but can be found in cold, mountainous locations throughout the world, for Rhodiola requires both high altitudes and low temperatures in order to thrive. A hardy perennial, Rhodiola is distinguished by spiky blue-green leaves and its bright yellow flowers. However, it is the plant’s roots that are most valued for their purported medicinal properties.

The roots contain numerous antioxidants, tannins, flavonoids, and rosavins, an active compound believed to produce antidepressant and anti-anxiety effects. The herb is a popular plant in traditional medical systems in Eastern Europe and Asia. Rhodiola was documented by the Romans as a headache remedy as early as the first century A.D. while Chinese emperors sent expeditions to Siberia to bring back “the golden root” for medicinal preparations. Thereafter, it was used as a general tonic, curing ailments ranging from fatigue to impotence to infection.

Rhodiola rosea is a remarkable herb that has a wide and varied history of uses. It is thought to strengthen the nervous system, fight depression, enhance immunity, elevate the capacity for exercise, enhance memory, aid weight reduction, increase sexual function and improve energy levels. It has long been known as a potent adaptogen. Adaptogens are natural plant substances that increase resistance to a variety of chemical, biological, and physical stressors, and normalize the functions of the body.

The people of central Asia considered a tea brewed from Rhodiola rosea to be the most effective treatment for cold and flu while Mongolian physicians prescribed it for tuberculosis and cancer.

For educational purposes only This information has not been evaluated by the Food and Drug Administration. This information is not intended to diagnose, treat, cure, or prevent any disease.